I was doing my normal grocery shopping and had no thoughts of breakfast sandwiches. Honest. I had one more item on my list before I was going to be on my way, and then I looked up and there was a sign, literally and figuratively, "breakfast entrees".

Did you know Special K makes frozen breakfast sandwiches? I did not. I accepted this opportunity which had presented itself and chose the Bacon, Egg & Cheese Flatbread variety, although there were several choices available.


The Sandwich - I chose the Bacon, Egg & Cheese but was close to going with the sausage. I'll be honest, I don't think it would have mattered. It's hard to go into eating this with an open mind but I did try, although my expectations were low. So low. I think when they are creating these things in their labs they probably spend as much time on the smell as the the flavor. This thing smelled OK when it came out of the microwave but everything went downhill from there.

I'm getting ahead of myself. You, the astute reader, are probably thinking "of course a sandwich made in the microwave will suck". You are not wrong to think that, but, these did not offer an alternative cooking process. The directions listed "in the microwave (recommended method)" and nothing else. So that's what I did. I guess I could have tried the toaster oven.

The pasteurized processed gouda cheese melted nicely. I can say that. Other than that this was more or less a squishy salt bomb. Looking at the ingredients we've got sodium phosphate, sodium erythorbate and sodium nitrate as well as good old fashioned salt. Given the flavor I was surprised to see that one of these is only 24% of your daily sodium intake. It tasted a lot higher. The spongy texture didn't help.

I don't think it's worth writing much else about this. Even for somebody who wants a quick and cheap option to eat before work, I can't envision them enjoying this. Who knows, though? Maybe I'm just a breakfast sandwich snob. (I am).

There are still three left that I'm going to put in the freezer at work with a note on them and they'll be gone within 48 hours, I'll bet. Maybe I can get somebody at work to offer a second, third or fourth opinion. That would be swell.

Hey, Porter Hey Porter...ok, now that's out of the way. I'll take the low hanging fruit every time when it comes to writing these reviews.

I don't do a very good job of keeping up with restaurant developments in this city. It seems like there is an awful lot of flux and I'm just a sandwich-face-guy with a day job. This is to say that I appreciate it when people let me know of new restaurants, or sandwiches specifically, which was the case here when Lindsay Christians let me know about Porter.

*eating runny eggs or rare beef might make you sick, but probably not.

I really like that runny egg/rare beef disclaimer. I want to have a t-shirt made with that phrase on it.

Right out of the gate I like that this sandwich is described as having an over medium egg, so you know it will be a bit runny, which could make you sick, but probably not. (It didn't.) If you're going to offer a ham based breakfast sandwich it had better be some damn fine ham, and that is the case here. Nobody wants regular-old-sweaty-deli-ham on their breakfast sandwich. Sharp cheddar cheese always pairs well with ham and I'm a big fan of mustard, stone ground or not. In my review of Breakfast Sandwich #74 I extolled the scant use of red onion to perk up a sandwich and they have that going on here, which plays well with the flavor of the mustard.

As a whole the sandwich has a just-too-salty-enough flavor that was perfect for me. The egg and cheese give it the viscosity it needs and the ham, mustard and onion combo is a welcome change from standard breakfast sandwich offerings. Oh, the bun. The bun did it's job. I don't want to take it for granted but that's all I have to say about it. It was admirable in its ability to allow me to cram bite after bite into my face.

Note - I usually cut the sandwiches in half so you can see a cross section of the goods. This sandwiches height is almost the same as its diameter and I knew that if I cut it in half everything would fall apart. I couldn't have that.

The Result - 4.8 Runny Egg Disclaimers out of 5 Runny Egg Disclaimers. A strong contender for Sandwich Of The Year, this one came at me with a bit of hype but it lived up to it. I will try the Porter Pocket one day but it will tough to pass over ordering this again. I can't say what would give this sandwich a score of 5. Maybe a touch of hot sauce, which they may have had there, I didn't look.

Aside - I'm hoping I can get to Sandwich #100 this year. It shouldn't be very hard and it's important to have goals. I was recently talking with one of the executives at my company and he asked me where I saw myself in five years. I said I hoped to have over 200 Breakfast Sandwiches under my belt, literally, and then I laughed but I was the only one laughing.

Posted by Breakfast on a Bun at 8:37 AM No comments:

stamped with golden arch
is there a branding iron?
scarification 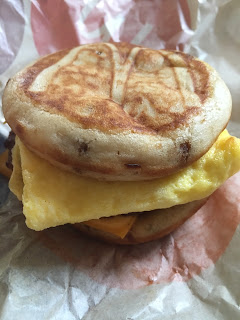 by design, clearly
a trick to fool the taste buds
not this reporter 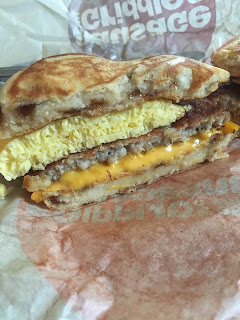 now introspective
did this sandwich touch my soul
or give reach around?

an empty feeling
pervasive and incomplete
not a happy meal