Breakfast Sandwich #163 - McDonald's (Again) aka There Was Some Regret

Do you remember what you did on Labor Day Weekend? Did you have a Sausage McMuffin that you forgot to tell the internet about? That's what I did. Thank goodness I still have the photos so I can relive that experience.

There isn't much of a story here - I was driving home and needed some food and I saw a McDonalds. I went for the classic Sausage McMuffin and got back on the road. That's how it happened. The second act of the story is that two blocks later I saw a Taco Bell and it was open and they had the "Breakfast" sign so passersby know they serve breakfast. Dammit! I've been wanting to try the AM Crunchwrap again since I reviewed it way back at Sandwich #25. It was too late. I had already made my choice. 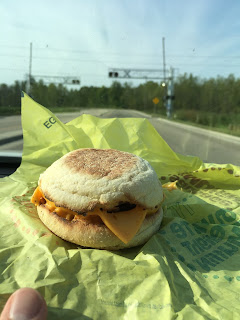 The third act of the story is that I ate this in the car and it was just OK. It wasn't as tasty as previous McMuffins and it was all because the sausage patty was overcooked and a bit dry. It wasn't bad but all the previous McMuffins that are reviewed here (and if I'm being honest there are too many) were better.
I give it 3.0 Wish It Were A Crunchwrap out of 5 Wish It Were A Cruchwrap.
Perhaps you are hesitant to accept that the AM Crunchwrap is a tasty breakfast item. I can understand that. Maybe you aren't willing to go to a Taco Bell in the morning. Also understandable. But perhaps you are also curious about it. There is a solution! It appears many people have had an AM Crunchwrap and they were willing to figure out how to  recreate it in their own kitchen. I haven't reached that stage but there are several home recipes that you can use to do just that. You have my full support in that endeavor.
Posted by Breakfast on a Bun at 8:44 AM