The Quesalupa was deemed enough of a cultural phenomena to warrant a guest review. This weeks reviewer is Molly Murn, whose breakfast sandwich credentials include being willing to eat a breakfast Quesalupa and promising to write about it. That was really all I needed to know in order to line up this review. Also, I think she writes funny things.
===================== 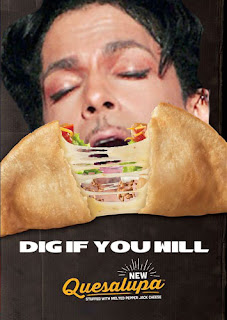 Dig if you will this picture, of you and I engaged in eating a Taco Bell Quesalupa!  Disclaimer: reading this is sort of like reading a "reply-all" e-mail when you're not the intended recipient. You're welcome.

OK, I'm not quite Prince and this is not quite as compelling, but I do implore you to at least try this special, once, before it's gone.  I realize I'm not in marketing and I'm not going to get anything out of promoting this breakfast taco, other than 100 percent of your respect.  Respect aside, here is my guest review of the Quesalupa.

It's not a fourth meal unless you've been up all night, or if you work fourth shift, but I digress.
Based off the queso and crunchy deep fried el gringo flour casing, this b-fast taco get's 8 out of 10 smiley face emoji's. In translation - I would eat this again, even if it made my stomach hurt.  If you're not the type to risk it all, you'd probably put it n the 5 out of 10 smiley face emoji's range. To be fair, my stomach is accustomed to this sort of debauchery.

If you're still reading this - let's cover the important deets: The 'lupa comes with queso, meats, cheese, lettuce, tomato and sour cream, I added bacon.  OBVIOUSLY.  If you want actual facts you have to read Patrick's review.  I'm not a fact based reviewer.  I like concepts, ideas and misjudgments.  Speaking of opinions - he's right, in the fact that it's super salty, just like you after I steal yo man.  Wait... no.  Anyways, it's super salty but I kind of like taking in more than 500 times the daily nutritional recommendation of sodium.  If you see me passed out at my desk I can assure you this is one of many valid reasons why.

Personally I would trade this Quesalupa in if they brought back the chili cheese burrito, but I'm not sure who you have to sleep with to accomplish such a momentous task.  I would, if paid, eat at least 10 of these at a Quesalupa eating competition.  Now that I think of it, someone should create a breakfast sandwich and breakfast taco eating competition.  YOU BE THE JUDGE!

In summary, I would suggest you try this taco (read only this sentence out-loud to your nearest co-worker, friend or significant other RIGHT NOW.)

-Murnout
Posted by Breakfast on a Bun at 6:48 AM No comments:

Is a Quesalupa a sandwich? No. It is, however, one of America's hottest selling breakfast items (I can't back that up with any statistics) and since I forgot about Taco Tuesday I decided to celebrate Quesalupa Wednesday. Is Quesalupa a real word? No.

If I had bothered to do any research prior to going to Taco Bell I may have decided against doing this review as there are already a glut of Queso-pinions online. From local reviews to discussions of the marketing aspect, you could spend the better part of a weekend reading about, or watching annoying youtube videos about the Quesalupa. (Skip ahead to the 4:00 mark if you want to see the old guy complain about the food, which is not a Quesalupa.) Here is an entertaining and informative review which is a better read than what I wrote. (I didn't read her entire review until I was done writing this). Well, shit, it's too late now, I have to write this.

I reviewed the Taco Bell AM Crunchwrap in June of 2015 so Taco Bell is the first place to get a return visit and review. That is embarrassing. I have barely started this review and I'm already filled with shame.


The Sandwich - Breakfast Quesalupa with sausage, pico de gallo and sour cream. When I ordered the pico and sour cream the lady felt the need to point out that those are "the cornerstones of Mexican food". I think that somehow made this Taco Bell experience more authentic. As I mentioned, I hadn't done any prior research so I didn't know the whole catch with the Quesalupa is that they put a bunch of cheese sauce on the tortilla and then build on top of that. I didn't try to cut the thing in half to show the innards but that would have really illustrated the featured ingredient of the Quesalupa. The sausage is on top of the queso cheese sauce and the eggs, potatoes, etc. are piled on top of that. The Quesalupa isn't exceptionally large although that seems to be the angle they market, along with the stretchy cheese. Anyway, when it comes to flavor, the Quesalupa isn't too bad. It's not great, it was too salty for my tastes but the sour cream and pico helped with that. The eggs get lost in the cheese and salty potato bites, but the queso cheese is a nice addition if you can accept that eating artificial cheese in the morning is OK every once in awhile. The sausage patty was small, it took a couple of bites to get to it which only revealed it's salty disposition. The fried tortilla thing was better than I expected, it didn't have the greasy sheen I imagined it would and it kept the 'Lupa together even after extraction from the cardboard cradle.

The Result - 3.4 fake Mexican foods out of 5 fake Mexican foods. The overly salty taste knocked this down some as did the slight queasy feeling that started about 30 minutes after I ate it. Luckily the queasiness only lasted for about an hour. Queasylupa. That's also not a word.

Posted by Breakfast on a Bun at 7:45 AM No comments: