I know nothing of the Green Forest Family Restaurant. I'd passed by it before on my way to wherever and it stuck in my mind as a place that would probably have a breakfast sandwich and it was added to the list. The list has long been exhausted and abandoned but on this Saturday morning I had to make a run out to the Dane County Landfill/Clean Sweep and I had some time to kill so I began hunting and gathering for a breakfast sandwich.

Speaking of garbage, my first thought was the Arby's out by the Dutch Mill Park & Ride. I actually pulled into the lot and did a quick search to determine if Arby's has breakfast sandwiches. At this point the sacrifices I make for this endeavor should be readily apparent. I didn't want to eat at Arby's. I searched for it anyway and when I saw this story I decided that was good enough for me. I didn't actually go inside to look at the menu because I didn't want to find out if they had launched a nationwide breakfast menu. It was fine with me if the only Arby's serving breakfast is in Manhattan which makes no sense at all but was true as of January 2016. There was a brief moment where I envisioned eating an Arby's breakfast sandwich in my pickup truck in the Park & Ride parking lot and it was going to be the saddest sandwich review ever and probably Pulitzer worthy and perhaps my ticket to sandwich fan fiction stardom. It was not meant to be.

I left the Park & Ride relieved, but unsated. The nearby Denny's was unworthy of consideration. I know everything I need to know about Denny's. The Green Forest was the obvious choice.

Before I went inside I did a quick search to make sure I could get a breakfast sandwich. Confirmed. I also learned that there is a pony who likes to party. 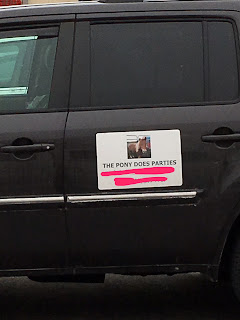 That sounds like a fun pony. Honestly, when I consider animals that would be fun to have at a party a pony is pretty far down the list. Aside from the obvious kittens and puppies I'd rather party with a sloth, capybara, baby goats, raccoons or piglets. That's just off the top of my head. Hell, a Komodo dragon would be way more fun than a pony assuming you have some ducklings or something to feed it. What? No. This is getting a little too dark. You see what driving past an Arby's and Denny's does to my head? This isn't even funny anymore.

I took a seat at the diner-style counter and ordered a breakfast sandwich.


The Sandwich - Sausage & 2 Egg Sandwich. I inquired about the bread choices and she explained they can also serve them on whole wheat or white bread, or toast. I was feeling All American at this point, probably due to the partying pony, so I went with sausage on white toast. No wheat toast today, thank you. They don't offer choices on how you want your eggs cooked, or choice of cheese, which is a shame. The sandwich arrived in short order and just as it did a man who I believe to be the proprietor sat down next to me. The woman on the other side of the counter I assumed to be his wife. This really is a family restaurant. He asked me how my breakfast was and we somehow ended up talking about electric cars and other random topics. He had some gyro slices on bread and he asked the waitress for some of the jelly that was in front of me. This lead to an odd exchange.

"You put jelly on your gyro?"

He sure was. Strawberry jelly, to be precise. I believe he is Greek and if a Greek wants to put jelly on his gyro who am I to question it? As a point of clarification I'd like to say that there were not onions, tomatoes or tzatziki sauce on the gyro meat. Mixing jelly with that would be gross.

There isn't much to say about my sandwich. My interaction with my new dining companion was far more interesting, which I guess tells you something about the sandwich. Truth be told, the sandwich was kind of sad. Take a look at it. It was as basic as it looks, the sausage wasn't particularly flavorful, the egg was not cooked how I like it and the cheese was overly melted. The white toast was OK though!

The Result - 3.01 Partying Ponies out of 5 Partying Ponies. If you recall the start of this project you know that the mission is to see how a breakfast sandwich can influence your day. In this case it was the entire interaction surrounding the sandwich which made for an enlivened and invigorating meal. The sandwich was but a footnote, and not much of one at that. So, the result you see above is the ranking for the experience as a whole. It would seem the breakfast sandwiches are not the forte at the Green Forest, and that's OK. I love that there is a family restaurant somewhat tucked off the beaten path that is making a go of it right down the road from a Denny's. While I may never again eat a breakfast sandwich at Green Forest I know for a fact that when I get that Pulitzer I'm having a big party with all you people and a pony and probably a sloth.